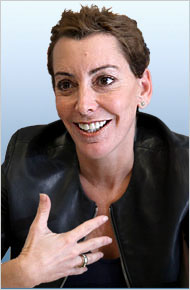 We’re feeling momentum as we continue to feature parts of our selves which at first blush are easy to disparage. Then upon closer examination, we see the value of bringing the full spectrum of who we are to the workplace, with glorious results.  Next up: the senior vice president and chief brand officer for media company The Elle Group.

Robin Domeniconi is a well-regarded executive of ELLE, ELLE Decor and Ellegirl, and oversees content, strategy, sales and marketing for all three publications. She’s held prominent roles in other prestigious organizations, serving as vice president of U.S. advertising at Microsoft, and president of Time Inc. where she launched Real Simple magazine.

And she’s dyslexic. In an interview with Adam Bryant of the New York Times, she spoke about being the boss in a corner office, and what she looks for in hiring new employees. Job seekers take note! She described the influence of her dyslexia on building relationships:

I also have dyslexia. A lot of times, people will say things that I don’t understand. I am never embarrassed to ask them to repeat what they’ve said. It’s a vulnerability that you show. I once had an editor say to me, “You’re the best publisher I’ve ever had because you’re not afraid to show your vulnerability.” … I have enough confidence to do that. I would like you to have enough confidence, too.

By exposing her dyslexic self to her employees, she authorizes her staff to bring their whole selves to work, breeding increased self-confidence, and she leads by example.  How invigorating to see a chief executive admit that there are things she doesn’t understand, and freely ask her colleagues to repeat themselves so she’s sure to comprehend everything. This attribute can be rare to find in a manager; must one have a learning disability to be this transparent at work?

In another segment of the interview, she described how she promotes an open work environment, enumerating the qualifications she seeks in interviewees:

Is her openness a function of being a woman in the executive suite? It’s hard to know for sure. What is certain is the amount of love she has within her. Love for herself, in the most productive way, and love for the world around her.

Her invisible disability translates to amazing ability, wouldn’t you say? In the comments below: